21. July 2018 by Papierzucker Bookmark the permalink 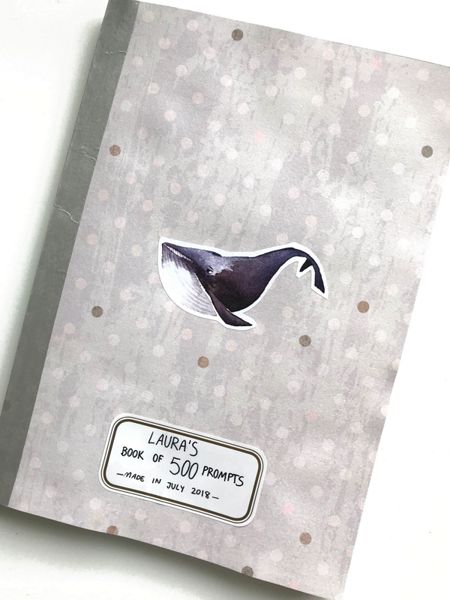 I have made a sketchbook with 500 drawing prompts á la Kasey Golden. If you don’t know her yet – shame on you! Nah, just kidding. You should check her out. She’s an awesome YouTuber/ illustrator and she’s one of the most creative people online. Her videos are very unique and funny.

She has a video series on YouTube where she uses the 500 Drawing Prompts Book by Piccadilly to create very funny illustrations and characters using single prompts or several prompts combined—depending on how many prompts are written down on each page of the book. She starts by sketching out several ideas and finishes the prompt(s) with a polished illustration on a separate piece of paper. In her videos, she always mentions that this method pulled her out of her art block. Also it helps to generate ideas and motivates you to draw things you wouldn’t think of by yourself. It’s a good way to practice different things and to build a portfolio. No skipping of prompts allowed!

I found another book series on Amazon that was very close to what I was looking for. It’s called 642 Things to Draw and there are several follow-up editions like 712 More Things To Draw or 642 Tiny Things to Draw. They even have a Young Artist’s edition. But I also wanted to include prompts that are more conceptual and describe an idea rather than a thing to draw. Of course, I wanted to have a good mix of abstract and concrete prompts. Because I couldn’t find something that incorporates exactly what I wanted, I decided to create my own prompt book. And this is how I did it:

I used this website to generate random English words: https://www.randomlists.com/random-words

I thought it would be a good idea to have more nouns than verbs and adjectives in it, so I decided to generate 300 nouns, 100 adjectives and 100 verbs. Especially in English, the category of a word is not always clear without context (e.g. hunt can be a verb or a noun). I don’t mind the ambiguity, because it gives you more freedom.

First, I selected the category nouns and set the quantity to 300. I pasted them into an Excel sheet and changed all plural forms into singular because I wanted to delete duplicates later. I didn’t want to have hand and hands in my list. Then, I deleted the duplicates  (Data -> Remove Duplicates) and some additional words that were too similar (e.g. simple and simplistic for the adjectives). I also deleted prompts without much content or that are too abstract (e.g. thing, stuff, statement). You might call that cheating, but I still wanted to have fun with those prompts later and not give up after the third one. I generated the missing number of nouns (about 20) and  ended up with 300 in the end.

I repeated the steps for adjectives and verbs, except that I set the quantity to100 each. In the end, I checked duplicates for the whole list and added more random nouns to reach500 prompt words.

I bet there is an easier and a faster way to do this. But this is how I did it: I randomized the whole list in Excel by using the Excel function “RAND”. This function creates a random number between 0 and 1. In German, it is called “ZUFALLSZAHL” as you can see below. It’s very simple to copy that function next to every prompt by double-clicking on this little square in the right bottom corner (it turns into a cross when you hover with  your mouse over it): 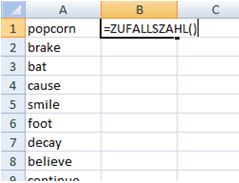 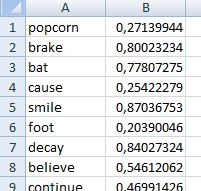 Then, you need to sort the whole list by the number size of the numbers in column B (Start -> Sort and Filter -> Ascending/Descending).

3) Randomizing the Number of Prompts per Page

I also wanted to randomize how many and which prompts will be on which page, ranging from one to three. Double-prompts should be the main part of the book. I just think that this is a great number to get creative without being too restrictive. I decided that I would like to put 300 of my prompt words onto 150 pages. So I was left with 200 prompt words on my list. I thought the easiest way to split them would be to have 50 single prompt pages, which leaves us  with 150 pages to divide by three (so50 pages with three prompts).

4) Writing Down the Prompts

I used cheap printer paper and wrote down the prompts on the front and back because the book’s purpose is to give me the prompts and to sketch out the ideas very roughly. Just like Kasey, I will do the final illustrations on a separate piece of paper or in one of my other sketchbooks.

Looking at the first prompts and numbers from one to three we get the following constellation for the first pages: popcorn, brake and bat will be on the first page, cause, smile and foot on the second and decay and believe on the third one. The fourth page will have the prompt continue (my brain is already thinking what to do with this boring one, sigh). I kept track of which numbers and which prompts I already had written down by marking them in different colors. 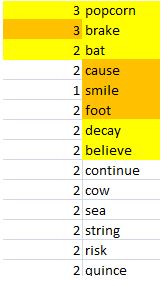 I was so influenced by Kasey’s 500 Drawing Prompts book that I started to separate the pages with lines. After numerous pages, I realized that this wasn’t even necessary because the prompts are supposed to be combined anyway. Shoot! Originally, the book was designed to draw every prompt on its own. Kasey just rolled with it and drew over the lines… well…. Now, my book has some pages with and some without dividing lines on them.

I used special glue for book binding. If you also want to do this, don’t forget to put a blank sheet of paper in front of the first prompt page and one behind the last page because the cover paper will be glued onto those.

If you want to see how I glue my sketchbooks—I use a technique that Baylee Jae demonstrates in this video.

The only thing I did differently is that I chose a soft cover. Consequently, I didn’t need cardboard to do this. I simply glued pretty scrapbook paper onto the front and back, covered the book spine with a metallic washi tape and decorated the front side with a sticker by Iraville and the title.

After everything was done, I realized that I glued the wrong side of the paper and that my last prompts were now in the front while my first prompts with the divided pages in the back. Moreover,the prompt words were near the glued spine and not at the outer edges where I wanted them to be. Well, that was a silly mistake, but what can you do? 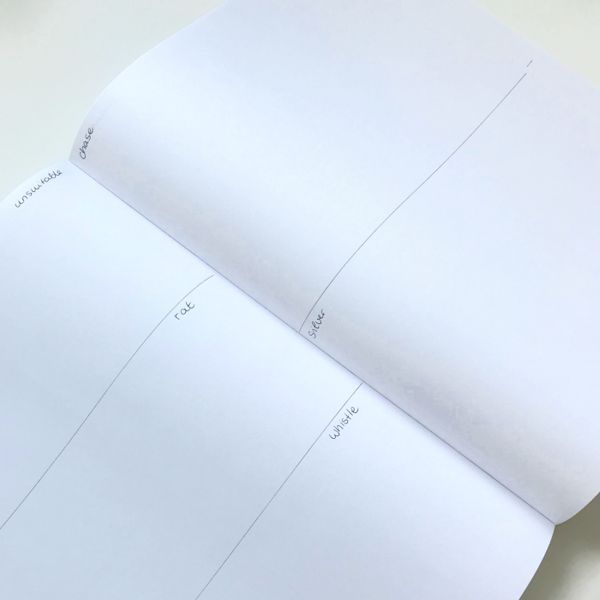 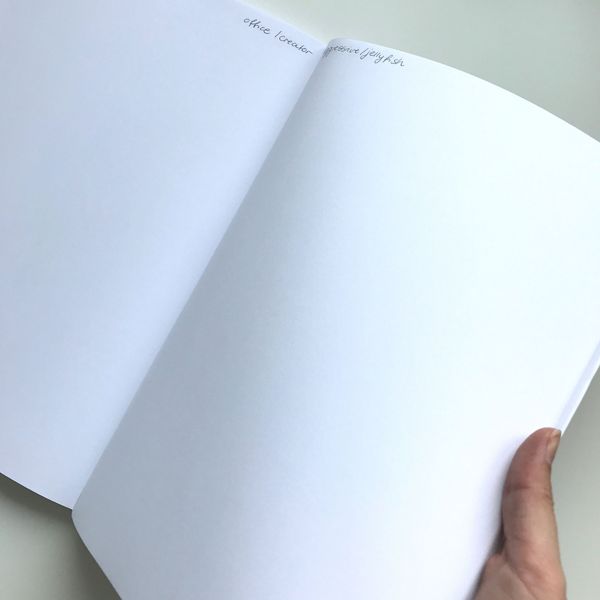 I hope this will inspire you to create your own prompt book. You can use a different word generator, different word categories and a different number of prompts, of course. But make sure not to think about each prompt too much while making the book because this will influence you to cut out prompts that don’t speak to you immediately.

I already finished the first illustration for the prompts zinc and line. I plan to continue this blog as a series, but the following posts will be much shorter. If I have time, I will also occasionally include a video. I hope that Kasey won’t be mad at me if I do that. 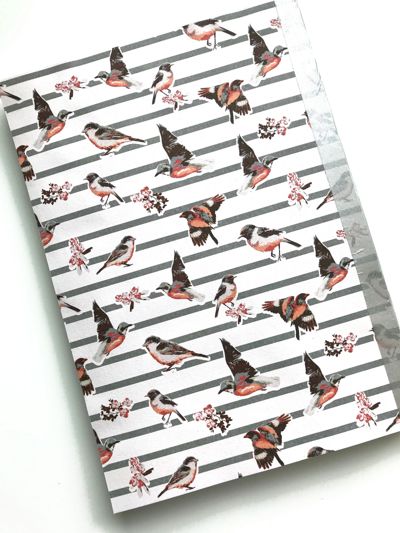