6. August 2018 by Papierzucker Bookmark the permalink 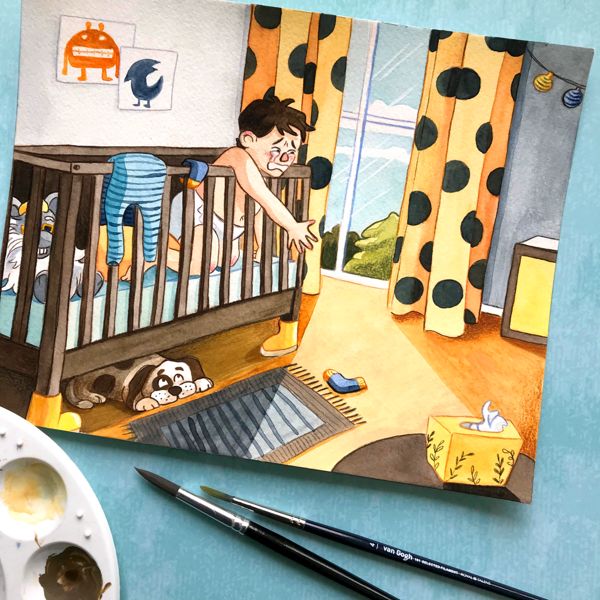 Drawing a Nursery is Fun

The second prompt for my illustration project consists of two words as well . We have crib, which is quite an ambiguous word according tomy online dictionary. In all my sketches I used the meaning ‘baby cot’. I don’t exactly know why, but somehow I really enjoy creating nursery backgrounds as you can see in this picture from 2017:

Illustration from 2017. I really enjoy drawing nurseries. Dots seem to be a thing, too…

Not Too Sad, Please

The second prompt word is mourn, which, in combination with a baby cot, made me come up with pretty sad sketches. All of the drawings on the left imply that a child has died or something like that.

After I woke up one morning, the most obvious idea popped into my head. I want to tell you a short background story.

When I was about two years old, my parents often found me naked in my crib. My bedding was rearranged and my clothes were hung up over the baby cot. They wanted to know what’s going on and decided to install a camera for the night. As an adult I watched this video several times and it’s so funny to see mini me talking to my plushies and being very busy ‘cleaning up’ the bed and ‘doing the laundry’. Suddenly a sock falls off the crib and I desperately try to reach it, my eyes fill with tears and my face looks like something really really bad has happened. After seemingly endless minutes, I wipe off my tears and say something like ‘doesn’t matter’ or ‘don’t care’ (‘macht ja nüscht’) and I already use my Brandenburg/Berlin accent which made me laugh so hard when I heard it the first time. It’s just fascinating how fast we pick up accents while we can’t even form whole sentences yet.

I remembered that story and I just had to use it as inspiration for my illustration. I also incorporated the little dog under the bed because I really liked the idea of the previous sketch. 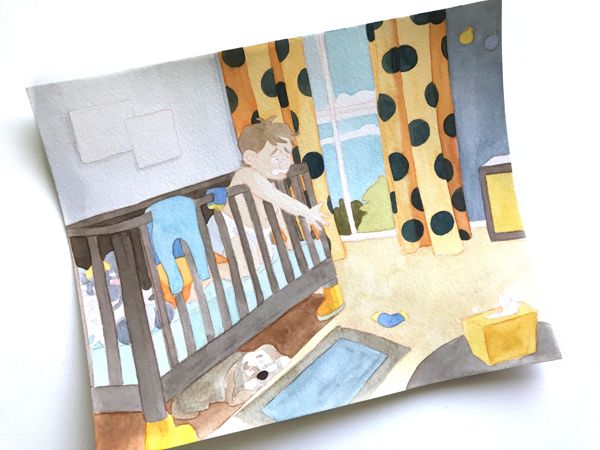 This is a work in progress after I put down the first watercolor washes. I try to cover everything with paint before I go into the details. I used to paint object after object, but noticed later that this way I couldn’t see the whole picture while painting.

I’m very glad that I found a way to combine the two prompts in a way that’s not sad, but actually a bit funny. I think my biggest weakness in this piece is perspective. I’m definitely going to focus on that in my future illustrations and I also want to educate myself more in this area. The shadows are a bit off as well, I think. I rarely draw images with a clearly defined light source, so usually it’s not too obvious when some shadows and highlights are not in the right place. Overall, I’m satisfied with the colors (I created a color thumbnail on my iPad before) and enjoyed drawing another nursery again – a full background, yay! 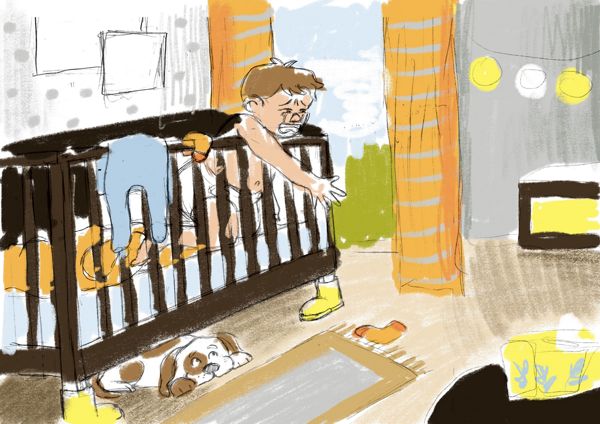 It’s important to play with the colors before you jump into the actual painting. I tried different color combos before, however,they didn’t really work together. Now that I did this color thumbnail on my iPad I’m much happier with the result, even though I changed some things on the go. 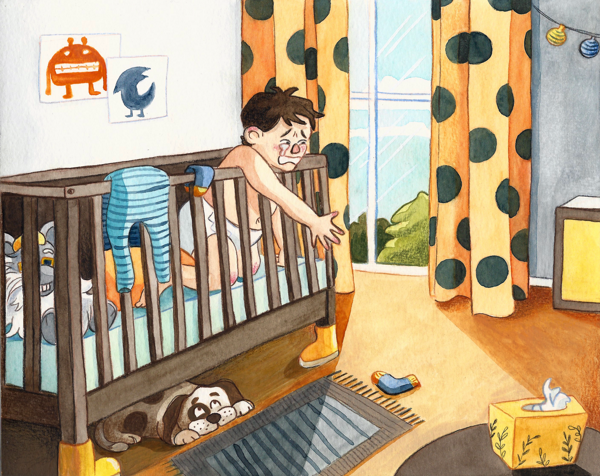